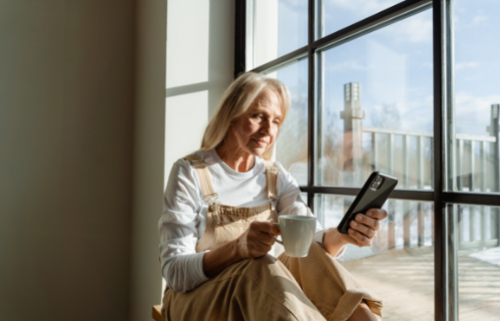 I received this text message recently. It was both out of the blue and somewhat expected. It made me suddenly realize that I feel sorry for my Ex’s new wife.

Over two years ago, my Ex and I divorced, following many attempts to reconcile that failed due to verbal and mental abuse. A year after our divorce, he remarried and moved in with his new wife, her two daughters, and our eldest son. I considered the marriage to be too hasty, but that was none of my business. They didn’t ask me.

Of course, when I learned of the pending wedding from my sons, I wanted to warn this woman. I wanted to urge her to be careful; the man is an abuser and an entitled narcissist. I wanted to send her an article for down the road: “Divorcing a Narcissist? Here’s What You Need to Know.” I felt compelled to share that this man would be unfair with money, that he would never accept responsibility for any of his actions, and that he’d never own any sense of guilt. He certainly never did in our marriage, nor our divorce. (He challenged any “division of assets” and he was unwilling to accept any responsibility for our breakup.)

For all I knew, Masha could be marrying him to escape an even worse situation. Maybe she was embarrassed by her situation, being unmarried with two daughters, or that marriage to my Ex was a blessing to her? Or, maybe my Ex would become a different person with her? I thought this as I remembered how he was with me when we first met at 19. As I considered these scenarios, I noticed I felt a twinge of jealousy. Perhaps this new girlfriend would get what I had long hoped for but failed to get.

I didn’t intend to learn more about Masha. But I couldn’t escape it in our over-transparent world of social media. My friends saw my Ex’s engagement announcement and they felt compelled to report back to me. A sure sign of support and loyalty to me (they thought) was to tell me that my Ex’s new fiancée isn’t as pretty as I am. I didn’t find that at all supportive. I found her good-looking and similar to me in type.

Learn what you could be doing and forgive yourself

Read “How Long Does It Take to Get Over a Divorce?”

Later my sons told me that Masha is a kind and caring woman. Despite having a career in finance, she cooks, looks after the house, does laundry, irons my sons’ clothes, and cuts their hair. They also told me that she doesn’t have a dishwasher or any domestic help. That sounded exactly like the type of a woman my Ex would like: kind-hearted, hardworking, giving, and especially, a woman with her own wealth. She was textbook prey to a charming narcissistic abuser. She was similar to me, I was hearing, in more ways than one.

I agreed to text with Masha.

When I did, Masha asked: “Is there a trick to keeping him calm and happy? How did you manage it?”

Masha talked about my Ex’s bouts with anger, his refusal to be clear about money or to chip in his fair share toward household expenses. She said he goes ballistic if she tries to discuss finances, all while insisting that they should have a child together, take out a mortgage, and buy an apartment. Masha said that she feels drained, helpless, and cries a lot. Instead of enjoying some kind of newlywed bliss, Masha was reaching out to me, the Ex-wife. She was desperate, by her own account. She needed help.

I advised her to take care of herself, her girls, and her money and make sure she doesn’t mess up her career with all this stress. Additionally, I advised against a mortgage because it weighs on a woman so much, especially in difficult times. I said nothing about whether or not she should leave because it’s a decision a woman must make on her own.

If you’re in your 40’s, you may wish to consider “The Truth About Starting Over After Divorce at 45.”

It was an intense but not altogether surprising text thread knowing the man we shared. It took me a while to process this communication, this sharing.

Below are some thoughts and feelings I want to share with SAS readers. Since processing my exchange with Masha, I’ve learned it’s not uncommon to be contacted by a new wife of an Ex. It’s not uncommon for them to reach out for help. Maybe this experience would be useful to somebody else.

I feel sorry for my ex’s new wife, the kids, and myself

I felt genuinely sad for Masha. She didn’t do me any harm; she didn’t ruin my marriage. Now, she was a sister-woman, a mother who was suffering. She had hopes that were dashed, and I related to that.

I felt pain and grief for the kids involved: two of my sons and two of Masha’s daughters. I felt upset that they were witnessing the fights. Should there be a divorce, it would bring yet more instability to their lives.

I relived my own conflicts and the divorce again. With these memories came the visitation of my broken dreams. I remembered when I decided to keep my money in a safe place. I remembered how tough my breakup was.

Check out “How to Overcome the 6 Hardest Things After Divorce”

I feel sorry for my ex’s new wife and felt guilty for not warning her in advance. I could have predicted that my Ex would continue the abuse. Moreover, I wanted to help. I wanted to save her.

But maybe even more than saving her, I wanted to save myself, as if by helping Masha I could go back in time and save my younger self.

I Feel Sorry for My Ex’s New Wife: Feeling Torn

While feeling compassion, I also felt something wrong, something manipulative about her reaching out to me. We have never met. We were not friends. While I feel sorry for my Ex’s new wife, I am not her therapist!

I was torn between wanting to help a suffering woman and believing that I shouldn’t interfere in other people’s relationships.

I started assessing my own ability and responsibility. It felt great for my ego to assume that I could help, change or save someone. But the reality is that I can’t. I can offer advice that will either be accepted or not. That’s it.

The trap was that I identified with her. I saw her looking similar to me and finding herself in a situation that I was in. But that is where our similarities ended. I created my family in my late 20s and had known my Ex since we were both 19. We had children together and created a home. Masha married him in her 40s and had a blended family, a rented apartment, and two ex-husbands.

In other words, she is her own person, an adult capable of making her own choices. She is responsible for her life and doing the best for her kids. I am not.

Realizing the limit to my saving ability and responsibility for other adults was enlightening. And humbling.

I enjoyed being proven right, I admit. But I didn’t make a song and dance out of it. A younger version of me would have loved the melodrama and would have called all girlfriends to report on Masha’s difficulties. I would have gossiped endlessly. I guess as I recover from my divorce, I build my own strength, my own self-worth, and I don’t need to be validated by anyone.

Every cloud has its silver lining. In my case, as I saw how bad my Ex is as a husband, I also appreciated that he is not that bad as a father. Both our sons have forged their own connections with him after our divorce.

You may not be so lucky with your children. Read our “What to Do When Your Child Refuses to Visit Their Father” for support on doing the right thing.

At the end of the day, hearing from Masha was therapeutic for me. I feel sorry for my Ex’s new wife. I shared with her what I thought she should know briefly. What she does with it is her business. As for me, I felt some letting go, some acceptance. I counted my blessings for getting out of my marriage.

Now I can get on with making new plans and enjoying my better life.

Anna Ivanova-Galitsina is a freelance copywriter and international communications consultant in Moscow, Russia. She prays for peace, especially for the women and children of Ukraine.

Since 2012, SAS for Women is entirely dedicated to the unexpected challenges women face while navigating the divorce experience and its confusing afterward. SAS offers women six FREE months of email coaching, action plans, checklists, and support strategies for you, and your future. Join our tribe and stay connected.